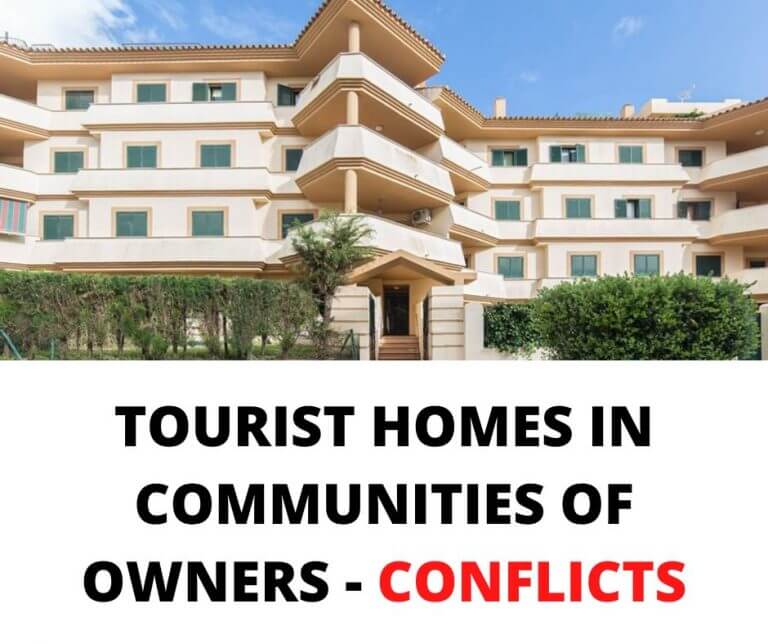 The phenomenon of tourist homes within the communities of owners is one of the most controversial issues that have arisen in this matter.

Renting a house for tourist purposes is not, in itself, a bothersome activity, but in practice it often generates problems of coexistence with neighbors, for example, due to the intensive use of common elements, which can be understood as a abnormal of the same and increase the risk of damage, or noise at certain times.

The solutions that neighborhood communities can adopt to the problem of tourist housing are diverse.

The tourist rental of apartments located in a community where the other owners have their habitual residence is an annoying and dangerous activity, being the use of the common elements by a large number of people an abnormal use of the same.

Currently, the communities of owners have the possibility of reaching agreements that limit or condition the exercise of the tourist rental activity.

These agreements require the favorable vote of 3/5 of the total owners who, in turn, represent 3/5 of the participation quotas , regardless of whether or not they modify the constitutive title or the statutes of the company. community. The agreements that are made in this sense cannot have retroactive effects, that is, they cannot limit the activity for those who have already been exercising it.

This relaxation of the majorities necessary to limit the tourist rental activity applies from 6-3-2019. Until then, this type of restriction entailed a modification of the statutes or the constitutive title that, as such, required the unanimous support of the entire community ( LPH art.17.6 ). This meant that if there was already a neighbor who was earmarking a home for tourist accommodation or had the intention of doing so, it was practically impossible to reach an agreement against it.

After this normative modification, the scope of the expression » limit or condition » contained in the norm is raised, that is, if the owners’ meetings can only with a majority of 3/5 prohibit without just cause the vacation rental or if only, they can establish limits or conditions that the owner must meet in order to dedicate the home to this activity and only if they are not met, prohibit it.

In the absence of a jurisprudential pronouncement on the matter, it seems that the majority doctrine is inclined towards this second option:

For the agreements adopted between 12-19-2018 and 1-23-2019 , RDL 21/2018 , repealed due to lack of validation in Congress, already established the relaxation of majorities currently in force, so those adopted during that period are fully valid and obligate the community ( LPH art.17.12 ).

Another solution that the communities can adopt is to admit the tourist flats but forcing their owners to pay special expenses quotas, or by increasing the quotas for participation in the common expenses for the dwellings in which this activity is carried out. For their adoption , this type of agreement requires the favorable vote of 3/5 of the total owners who, in turn, represent 3/5 of the participation quotas.

In any case, the increase cannot exceed 20% of the fee that has been paid.

With this measure, it is not intended to sanction the owner who dedicates his home to the activity of tourist rental, but to make the use of common elements proportional to his contribution to the community.

If the community considers that the owner or occupant of the apartment develops in it or in the rest of the property prohibited activities in the statutes, which are harmful to the property, the president of the community, on his own initiative or that of any of the owners or occupants, may require whoever carries out the prohibited activities to immediately cease them. If the owner or occupant continues to develop the harmful conduct, they can go to court so that the courts can decide on the matter

In relation to tourist housing, apart from the agreements that the communities may take to, in the future, prohibit the activity, the question that arises in the courts regarding those that already exist, is whether dedicating these homes to tourist rental is a prohibited activity, analyzing the regulation in the statutes and its interpretation.

The position that the courts have currently taken is to admit the restriction or prohibition of tourist flats in a community of owners only when a clear and express prohibition is contained in the constitutive title or in the statutes, which affects third party purchasers and provided that the statutory prohibition is registered in the Land Registry. With such a ban, the community of owners is taking a preventive measure in order to avoid annoying activities .

The autonomous communities, in light of the controversy that has arisen with these dwellings, have been regulating this matter to adapt it to the current situation and try to avoid, as far as possible, these conflicts that have arisen in the neighboring communities.

Prior to this trend, it was interpreted that it was enough that the term dwelling was used in the constitutive title or in the statutes of the community of neighbors to consider that the only permitted use of the flat was for that purpose, residence or home and that, as such, contradicted that of the tourist purpose.

LEGALIZATION OF CONSTRUCTIONS WITHOUT A LICENSE