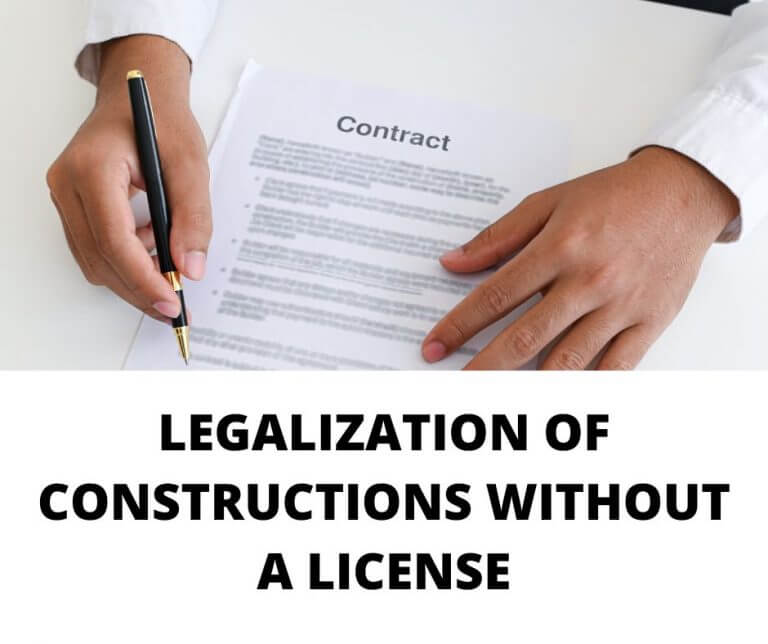 LEGALIZATION OF CONSTRUCTIONS WITHOUT A LICENSE

Spanish regulations establish that, in order for a construction to have access to the property registry, notaries must require that the building license be provided, and all the construction documentation, including the final work certificate, etc.

However, what is the situation of those buildings that have been built without a building permit?

In these cases, the same land law establishes, in its article 28.4, that those constructions, buildings and installations with respect to which it is no longer appropriate to adopt measures to reestablish urban legality that imply their demolition, due to the expiration of the limitation periods corresponding, may have access to the property registry.

What is the purpose of a building to have access to the property registry?

The fundamental reason for this is that a construction that is not part of the property registry cannot be part of any legal transaction. That is, you cannot buy, sell, inherit, mortgage, pay taxes, etc.

But, once a construction, built without a license, goes to the property registry, is it fully legalized? In other words, can it be considered 100% legal?

The answer is complicated.

As we have said before, the access of a construction without a license to the property registry means making this construction legally visible.

In addition, if this were the case, that is, if the administration were aware that there was an illegal construction, it would automatically have to act by ordering the demolition of said construction as it was considered illegal.

What happens is that the Spanish administration , due to the same principle of security in the legal traffic of legal and commercial actions, cannot hold an indefinite term to act against those works and constructions that have been carried out illegally.

With which, the different Spanish regional regulations always establish a maximum time limit for public administrations to detect the works and constructions that are built without a license, and thus be able to penalize them through administrative sanctions, fines, and even demolition orders. After this time without the administration having detected, or without having acted against the construction, it becomes legalized and patrimonialized in the owner’s assets.

In Spanish legislation, this term is different according to the different Autonomous Communities.

We are now going to talk about two cases, the Valencian Community, and Andalusia.

To determine the expiration term of the actions of the administration in these cases, it is necessary to distinguish between two cases:

Undeveloped land, rustic, protected . For works that are located on non-developable or protected land , there is no expiration period .

Therefore, regardless of whether the possibility of financially sanctioning said works has expired, the administration can at any time order the demolition of works built without a license, since, as we say, the right of the administration does not prescribe.

In other words, it is possible to declare a work without a license as long as it had been completed before August 20, 2010 . This date is very important, because it means four years before the entry into force of LOTUP, which was precisely on August 20, 2014.

With, the works on urban or developable land that, at the date of entry into force of this law, were prescribed for having a construction term for having elapsed more than four years (that is, all constructions completed before August of 2010), can be legalized by accessing the property registry . .

However, those constructions on developable urban land that were built without a license after the date of August 20, 2010 , such as, for example, 2011, 2012, 2013, etc., the limitation period of the demolition orders of said constructions it will be 15 years .

The same occurs with constructions built on common undeveloped land , which may have access to the property registry provided they were built before August 20, 2010.

However, and very importantly, those constructions on undeveloped land that were completed as of August 2010, are subject to the imprescriptibility regime of Law Five/2014, of the LOTUP.

And with regard to protected undeveloped land, only those constructions without a license that have been completed before February 1, 2002 may be declared.

This is so, because this date coincides with the passage of four years that governed in the previous legislation and with the entry into force of the Valencian Urban Law 16/2003, which entered into force on February 1, 2006, which came to establish imprescriptibility for protected land.

The same occurs in Andalusia, although there is no distinction between urban and non-urbanizable. In both cases, the Law of Urban Planning of Andalusia 7/2022, in its wording after its last modification on February 8 , 2012, increases the limitation period of the right of the administration to demand the demolition of the works from 4 to 6 years. built without a license.

As in the Valencian Community, this period is understood to be applicable to works without a license for which, on the date of approval of the law, the period of 4 years established in the previous legislation had elapsed. In other words, all constructions built before February 8 , 2008 can be legalized.

Therefore, for those constructions built after this date, the statute of limitations becomes 6 years.

The same can be said in Catalonia. Legislative Decree 1/2010, of August 3, approving the revised text of the Catalan Urban Planning Law, increased the limitation period for the action to restore the urban legality of buildings from 4 to 6 years .

However, in Catalonia the Andalusian and Valencian interpretation of the term in which the new extended term of 6 years begins to apply is not given. According to the Catalan criteria, those works that were built before the approval of the law, that is, August 3 , 2010, would have a statute of limitations of 4 years. And those built later, the term would be 6.

OKAY. It is understood!. So, if I have a construction without a license in which the periods established in the legislation of my Autonomous Community have elapsed without being sanctioned, is my home 100 %?

The answer is a bit complicated.

As we indicated in this report, the passing of the term to sanction/penalize a construction grants the power to register said construction in the property registry.

This means that: the owner can “own” the work without a license. It can be mortgaged, leased, sold, inherited, donated, etc , so the Spanish system cannot decree its demolition.

For this reason, these constructions that were built without a license, but that have been registered in the property registry, are cataloged in a special way. They are called “out of order” constructions.

This type of construction is subject to certain limitations with respect to legal constructions: