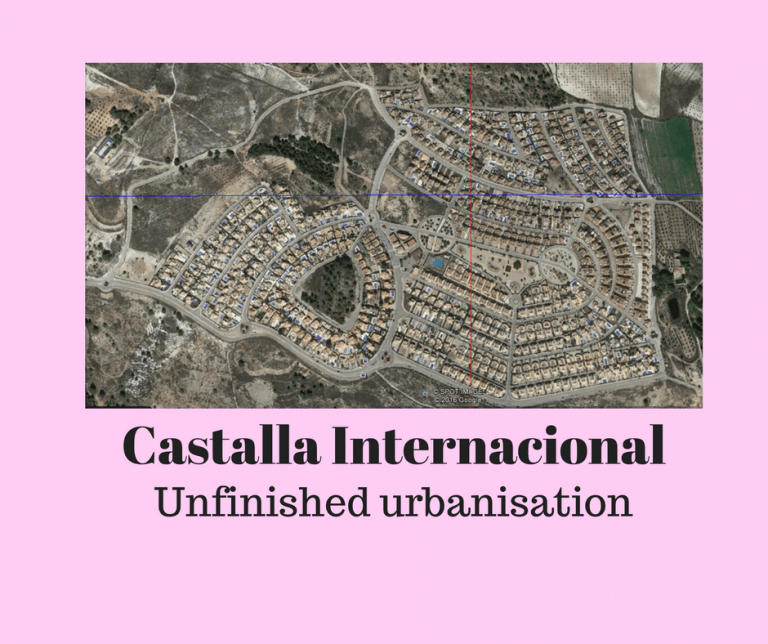 “Castalla Internacional” is an urbanisation built in Castalla, Alicante

It was built in the years 2000-2005 where the main aspect to consider is that  the urbanisation infrastructure has not been completed.

This urbanization was divided in 2 Phases:

This article is considering the situation of the Castalla Urbanisation in 2016, specifically to Phase II.

Talking about Phase II, from the time in which the urbanisation started, the Town Hall has been trying to arrange the owners to complete the works, and seems that in some of the areas of the urbanization, it was possible to conclude the works, and they are now finished.

But, there are  works pending to be done. And also, Works already done, must be checked by the Town Hall to check if they have been done properly, and/or they must be modified or improved.

It seems the Town Hall created a Project in order to force the owners to complete the Works which was refused by the group of urbanization of the area, but this project is still not definitive, and there is not confirmation now when it will be.

The main Works to be completed are:

It is true that the initial builder left an amount of Money that the Spanish law requires, in order to cover the case in which the builder does not complete his job (as this case).

Also, it is true that a high percentage of urbanisation Works are already done in the area, like pedestrian, sewage, etc,

But, as the Project was not approved, and the Works were not finished, are now doubts like:

Unfortunately, the Town Hall is not in the position to solve these questions in this moment.

What are the consequences of this?:

Together with the eventual future payments pending to be paid on the urbanization, properties in that area should not get the certificate of habitation. This document confirms that all the works of the building, including the urbanization works, are finished and completed legally. As this is not the case, the Town Hall cannot issue certificate of habitation for this property, and the other ones in the area.

In theory, properties without the certificate of habitation cannot be connected to mains water and supply. But, poreprties in the area have proper water and electric connection supply.

We  have to say also that in the past there were some Certificate of Habitations provided to some of the properties int eh area. We have been confirmed by the Town Hall that these documents have been considered not valid, so not possible to renovate them to future owners.

Following the Town Hall staff and the president of the community of owners, in theory, once the works pending to be done in the urbanization, all the owners will be provided with the proper certificate of habitation.

We have to say that we have noted that the intention from the Town Hall is positive to this point, and they are using all the efforts to complete the case in the best manner to local owners. So, hopefully situation is sorted in the best way in the near future.

We specially recommend when buying in Castalla Internacional to get proper legal advice from specialist lawyers in Planning Development and Construction.

IMPORTANT NOTE: This article was published in 2016 due to a particular study demanded from one of our clients, and that is not updated. For updated information on the current situation of the urbanisation, we recommend you contact the Urbanismo Dpt of the Town Hall of Castalla.

AN EXAMPLE OF CALCULATION OF SPANISH INHERITANCE TAX IN VALENCIA, MURCIA AND ANDALUCIA

DO I HAVE TO PAY TAXES IN THE PURCHASE OF FURNITURE FROM A PARTICULAR?